In our previous report we predicted slightly increasing vacancy in 2020, continuing into 2021. After nearly two years of record-low vacancy levels, increased construction and lower employment growth were expected to relieve some of the pressure off vacancy. As at April 2020, vacancy in our Greater Oslo office clusters was measured at 5.4 %. This is up 20 bps since October and 30 bps since April 2019, which is in line with our original forecast for 2020. There is, however, no need to point out that Covid-19 has completely changed market conditions, and that vacancy is likely to increase much more in 2020 compared to what was initially expected. Our current view is that vacancy should top out at around 7-8 % in 2021. However, the virus’ development and the resulting economic uncertainty makes the estimation of office vacancy much like shooting a moving target.

An update on vacancy in Greater Oslo

Vacancy in Greater Oslo was measured at 5.4 % in April 2020, which is an increase of around 20 bps since our last market report and in line with our pre-crisis forecast. Central Oslo has the lowest vacancy of 3.6 %, while the Western and Eastern fringe have vacancies of 6.1 % and 7.3 %, respectively. The Western and Eastern fringe zones have switched places vacancy-wise. Vacancy in the Eastern fringe has increased, mostly due to new constructions at Økern/Løren/Risløkka that are approaching completion. Many of the newbuilds are only partly let out which is now gradually being reflected in vacancy. As for the Western fringe, vacancy has come considerably down. This is mostly due to decreases in vacancy at Skøyen, where for example Drammensveien 144 has been taken off the market. 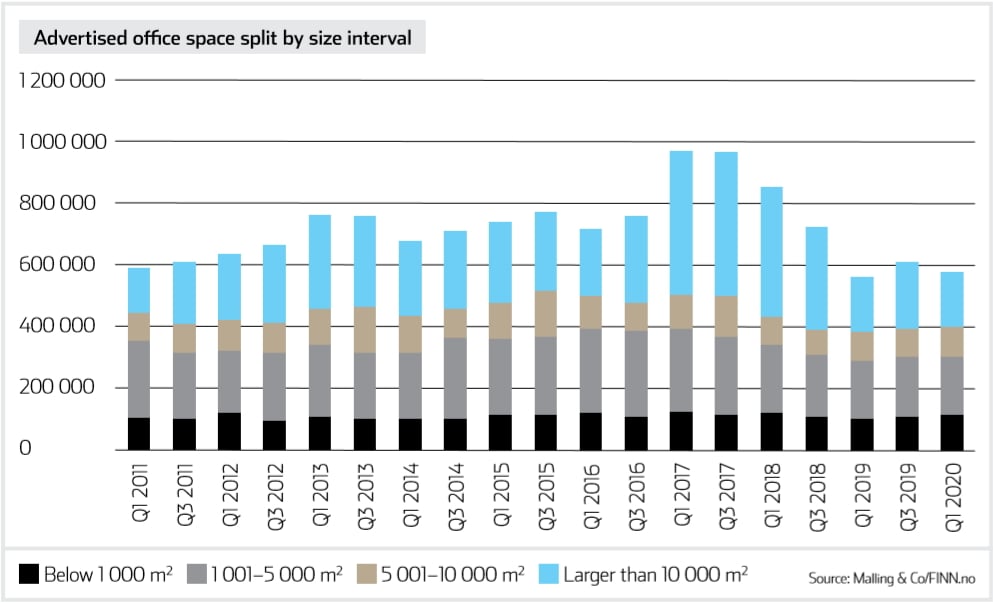 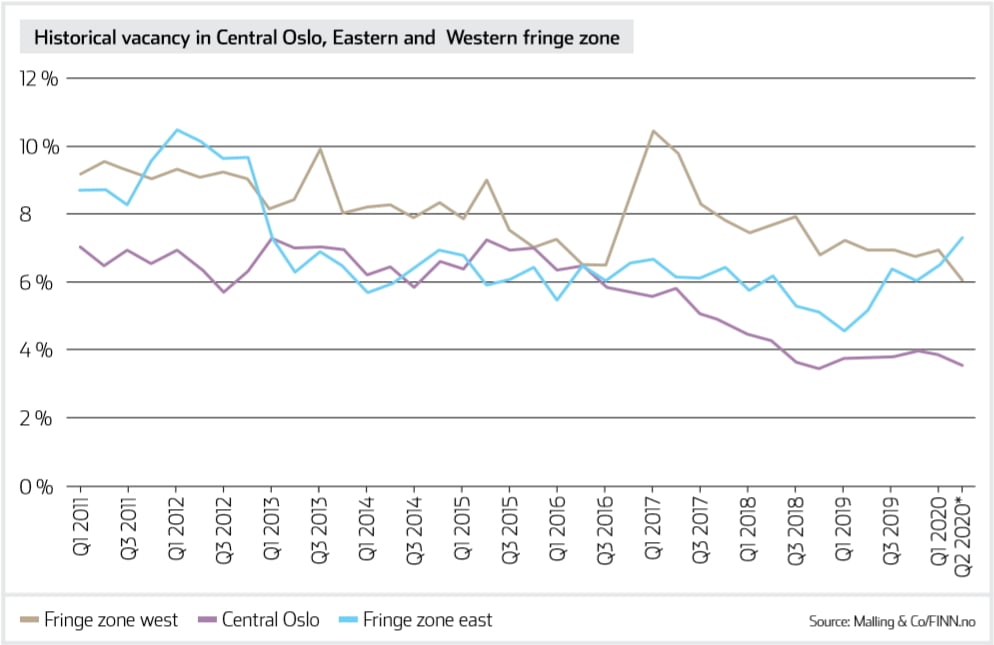 Although we expect all clusters to be affected eventually, some clusters will likely see higher increases in vacancy than others. Central Oslo has the advantage of coming from very low vacancy levels with an average of 3.6 % in April. The area is also generally more sought-after by tenants. The Inner City and Kvadraturen, however, have higher shares of exposed sectors within their tenant-base compared to other central clusters, which may result in higher vacancy-increases there. It is also worth noting that the Inner City’s supply is measured at 8.5 %, which is more than the double of its vacancy of 3.9 %. In addition, there are several refurbishments in Central Oslo, which increases supply of high-quality space, even if it does not involve new space. Some of this space will most likely eventually become a part of the vacancy, depending on whether the space is let out or not before approaching the 12-month limit, and on whether the projects will actually be built.
The Eastern fringe has the highest share of expected new construction, however many of these newbuilds have already been added to vacancy, which is currently measured at 7.3 %. Moreover, the tenant-base in the east is not necessarily weighted towards sectors at risk of bankruptcy. A large share of public tenants at Bryn/ Helsfyr and Nydalen/Sandaker may work as a partial cap on vacancy in the Eastern fringe. Vacancy in the Western fringe is currently measured at 6.1 %. After the oil price drop in 2014, subletting increased particularly in the Western fringe, where the oil sector in Oslo is located. Although the Western clusters’ tenant base is more dispersed now compared to then, we consider the Western fringe of being at higher risk and that some western clusters might see an increase in lease defaults and subletting over the coming months and years.

As our expectations for new construction have been adjusted downwards considerably, the main determinant for vacancy going forward is the shut-down’s effect on demand through employment, as well as potential bankruptcies leading to an increase in contract defaults. Currently, office-related businesses are not directly affected, but over time an economic recession will affect these sectors as well. In short, we used historical employment figures to estimate the relative change in employment in Oslo given a change nationally. Multiplying this figure by the average size (m2) per employee, we estimate the expected change in underlying demand over the next three years. We then adjust this figure downwards in our vacancymodel, as we do not expect change in employment to have an immediate effect on available space, except in potential bankruptcy cases. This also applies the other way around, as increased employment does not result in an immediate increase in absorbed space, but rather in less space per employee.
Although net new construction is expected to be modest, the negative change in demand is expected to create an explosive growth in vacancy in the second half of 2020 and into 2021. We expect average office vacancy in Greater Oslo to increase by around 200-300 bps in 2020 and 2021, before stabilising in 2022. 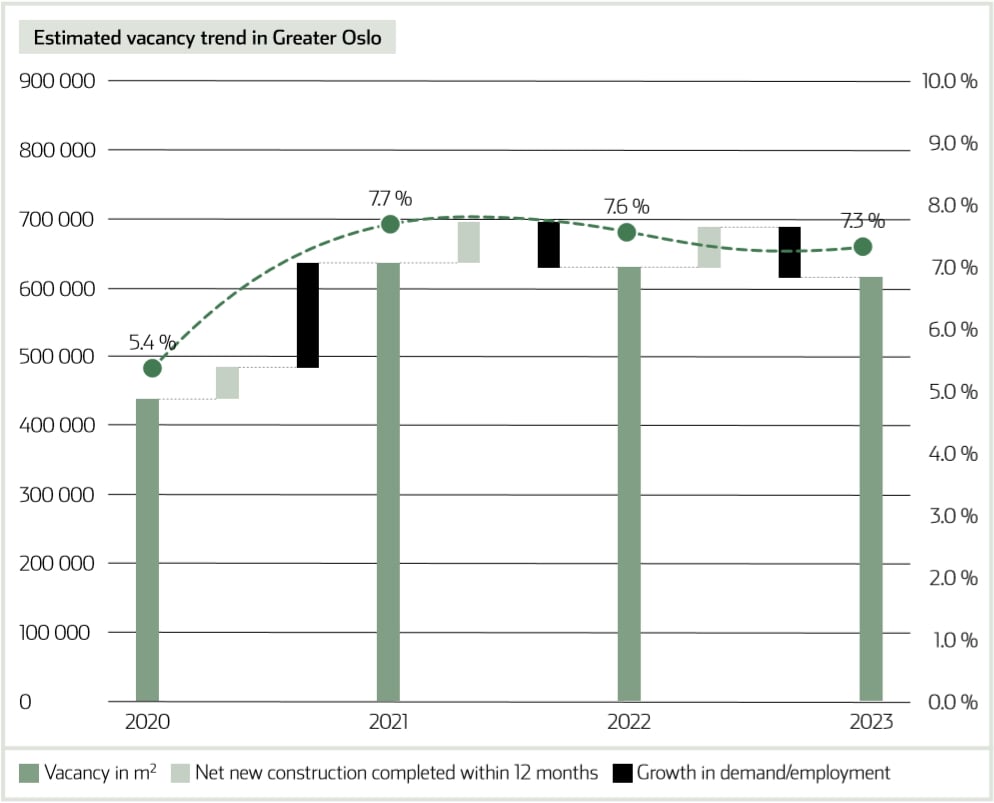 This is a section from our latest Market Report. Read more in-depth research and analysis into property market trends, forecasts from our specialist research teams here;