Now that we are nearing the end of 2022, one word can describe this year so far: Volatile. Russia’s invasion of Ukraine, record high inflation, price increases in electricity, gas and other fuels, supply shortages, policy rate hikes from central banks, lower consumer confidence and bleak stock markets throughout major economies are the main headlines. Despite these challenges, Scandinavia has fared quite well compared to their other European counterparts, however this should not undermine the situation present in respective Nordic country. One common denominator among major economies is their fight against respective country’s goliath, the inflation.
Over the summer, most central banks have intensified policy rate hikes in order to curb the continuous high inflation seen across much of the globe; some world economies were more aggressive with their hikes while others were more conservative. Market interest rate expectations have increased along these hikes, also in the longer term as markets fear that high inflation and higher interest rates will remain for a longer period than first anticipated. This has led to an increase also in the long-term interest rates, usually the most important for real estate investments. Below is a chart presenting how the policy rates have developed in respective country/region:

The Nordic region’s central banks are focused on curbing inflation

The Swedish inflation rate for September amounted to 10.8% per CPI compared to the previous month, which was at 9.80%. The month of September saw the highest inflation rate according to the CPI since 1991. To ensure that the inflation goes back to its target level of 2.00% and counteract any further increases, the Riksbank decided on the 20th of September to raise the policy rate from 0.75% to 1.75% (which was applied the 21st of September), this is the highest rate hike in three decades. The Executive Board’s projection is that the policy rate will be raised further in the coming six months and that it will reach a level of 2.50% at the beginning of 2023. Inflation is projected to peak in 2022 in Sweden before decreasing significantly in 2023 and returning to around 2.00% p.a. from 2024 onwards.

Norway’s annual inflation rate increased to a value of 6.90% in September from August’s lower recorded value of 6.50%. This is the highest recorded inflation rate in over 30 years. Norges Bank (The Central Bank of Norway) raised their policy rate by 50 bps on the 22nd of September and with the increase, the new policy rate landed at 2.25%. The rate hike came the day after the FED announced their increase with 75 bps to a range of 3.00 – 3.25% on the 21st September, the highest it has been since early 2008. Norges Bank made minor changes to their policy rate projections; however, they revised their economic outlook. Relative to their September-report, Norges Bank revised GDP-growth expectations for Mainland Norway down from 4.20% in 2021 to 2.80% in 2022 and to – 0.30% in 2023. Norges Bank also expect the employment market to shrink, with a negative growth rate of -0.40% and -0.10% in 2023 and 2024 respectively. 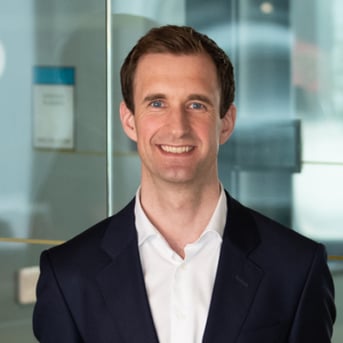 “According to the latest projections from Norges Bank, they are expecting negative economic growth and decreased employment over the coming year, still yet determined to increase policy rates to curb inflation and to close the positive output gap in the economy.”
- Haakon Ødegaard – Head of Research and Valuation/Partner, Malling & Co

Danish inflation usually follows the price development in the EU, but has since 2017 remained at a lower level. By the end of 2021 and especially in 2022, Denmark has experienced large increases in inflation, which during the year has climbed above 8.00%. The latest inflation rate, which was communicated in September, landed at 10.00% for Denmark, compared to the inflation in August, which was at a value of 8.90%. For several years, the Danish policy rate has remained at exceedingly low and negative levels, but now we see an increasing tendency. In September 2022, the ECB raised the policy rate by 75 bps, and the Danish National Bank followed suit with a rate increase of the same size. 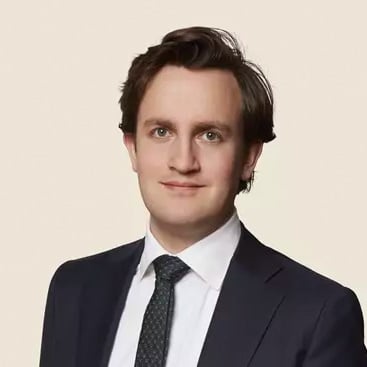 “The recent increase in the inflation comes after a longer period with low interest rates and high economic growth in the Scandinavian region. We expect the central banks to play an instrumental role in stabilizing the economies through the key policy rates.” - David Hauge – Head of Data & Research, Nordicals 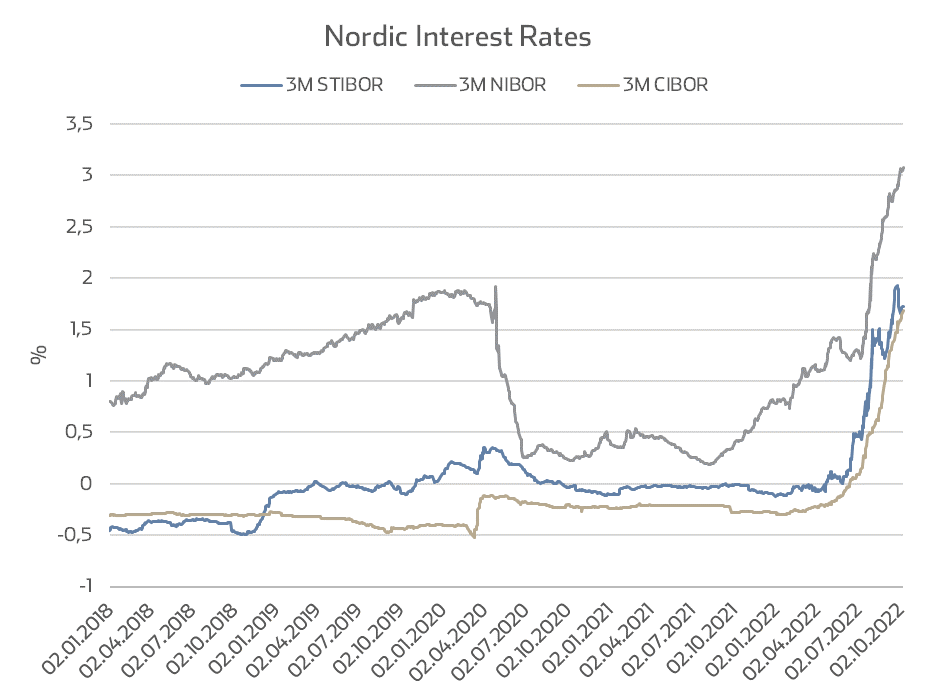 The European macroeconomic outlook has deteriorated throughout the year, and we are currently in a changing market driven by events in the wider world. Falling economic sentiment and low consumer confidence has the potential to set an uncertain market backdrop. According to the FED and the ECB, the inflation is expected to decrease in 2023 as higher interest rates curb demand and reduces pressure.
The recent development in Ukraine has potential to prolong the stabilisation of the inflation in the short-term especially as the energy prices are affected by the sanctions imposed on Russia. We will most likely see continuously high inflation rates over the winter as it takes time to replace Russian gas in the European energy market. Thus, further increases in energy prices are expected over the winter.

Financing costs are increasing (from low levels) as both global and Swedish interest rates have increased significantly in 2022. Both long-term and short-term interest rates have increased significantly during 2022. As of October 11th, the SEK 5-year Swap rate is 3.32%, compared to February 23rd (the day before Russia’s invasion of Ukraine), where the SEK Swap rate was 1.23%. During the summer, the SEK 5-year Swap rate decreased by 80 bps to 2.20%, however, it has risen once again due to higher inflation- and policy rates. The 3 months STIBOR rate went from the zero mark in March to 1.72% in mid-October.
While The NOK 5-Year SWAP rate was below 0.50% in May 2020, it increased to just below 1.00% by the end of 2020, and to 1.85% by the end of December 2021. Year to date, the SWAP rate has increased more rapidly, and by the 11th of October, it was at 3.75%. This interest rate hike comes in addition to increased lending margins on bank loans and credit margins on bonds.
The DKK 5-Year SWAP rate has developed similar to the other Scandinavian countries. In the beginning of the year, the SWAP rate was at around 0.26%. By the 11th of October it was at 3,49%.

“As we are awaiting market rates to remain at high levels for the remainder of this year and in the beginning of next, the future path of the policy rates will depend on how the economy evolves and most countries’ projections are more uncertain than usual.”
-Maryrose David – Head of Research, Savills Sweden

As mentioned, interest rates have been increasing in efforts to curb inflation and further interest rate rises are expected. However, the interest rate term structure indicates expectations for lower rates a few years out on the curve, explaining why long-term SWAPs are seen at lower rates than short term.

In the Scandinavian investment market, real estate corporate bonds will be a crucial instrument for investor appetite. If issues start ensuing with debt refinancing, there could be some forced sellers among property companies on the market as credit margins and interest rates have risen significantly.

The table below displays assessed costs of financing at the end of 2021 and year to date. As seen from the table, the financing costs has increased significantly and for Sweden and Denmark, financing costs have doubled. All in finance rates are pushing yields upwards as commercial real estate investments become unprofitable at the record low yields seen over the past years.